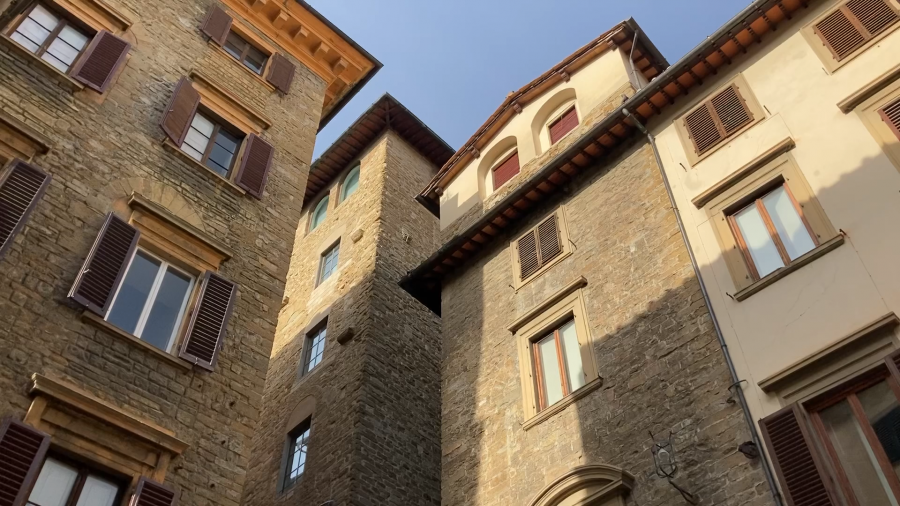 Le Residenze a Firenze > THE BLOG > Tower houses in Florence

The tower houses in Florence were built for lack of space. The city walls were narrow and the population reached 30 thousand inhabitants at the end of 1100. There was not enough space and people began to build in height. Some towers belonged to a single owner, but in the twelfth century tower societies spread. A form of association for which the same tower belonged to a group of different noble families allied.
In 1300 there were over 1500 towers in the city.

The tower houses in Florence were a lot but today it can be difficult to identify them because they have been incorporated by the palaces built in later times.

The tower houses have developed in Florence around 1200 and had the dual function of habitation and fortification for defense. Incidents of violence and justice between rival families were very frequent and in case of need, members of the families could repair safely in the tower house. The nearby tower-houses of the allied families could be connected through real wooden drawbridges supported by long poles inserted into the holes opened in the wall of the tower. In case of danger the bridges could be destroyed, allowing a complete defense from possible enemy attacks.

When alliances and friendships between two families ended, they proceeded to “cut the bridges” between their respective towers.

The tower house as a symbol of prestige

Around 1400 the tower-houses assumed the function of prestige, so every family built a tower with which they showed off their social and economic position in the city. The higher the prestige position, the higher the height of the tower.
if a family fell into disgrace for political or economic reasons, the head of the tower was destroyed and reduced to a size more appropriate to the new situation.

The height of the towers could not exceed the height of the Bargello, seat of the captain of the people and symbol of political power, and it could not exceed the tower of the bell tower that Giotto had built for Santa Maria del Fiore, symbol of spiritual and religious power. This rule was respected in all the cities of Tuscany. The two insurmountable roofs were the tower of the municipal palace and Giotto’s bell tower, sanctioning the unwritten rule by which earthly and material power must always be subordinated to the interest of the public thing and to divine power.

Scandal alley: the problems among the families of tower houses in Florence

At the end of the political war between Guelphs and Ghibellines (with the victory of the first and the destruction of the towers of the second) the polemical and factitious spirit of the Florentine people opened a new dispute between White Guelphs and Black Guelphs. The Whites led by the Cerchi family and the Blacks led by the Donati family.
The two families lived in the same Sestiere of San Pier Maggiore and the houses of one bordered on those of the other. Often the nearby streets were scenes of struggle between members of the two factions. Fights, stabbings, people even broke through the walls that divided the houses to continue the fights inside the buildings.

The magistrates of the Bargello were forced to take a decision that could definitively settle the situation and ordered the construction of a border space between the properties of the Cerchi and the Donati. An open-air alley was created, wide enough to prevent encroachment. This alley, still visible today, was called “scandal alley“.
If you want to discover it, book your tour of Florence with our guide during your vacation at Le Residenze in Florence.

Tower houses in Florence: how people lived at that time

The entrance door was small and was at the second floor level, it could be accessed by a wooden staircase that was raised and stowed during the night hours to completely isolate the building. In the tower houses the rooms were one above the other and they could be reached by means of a ladder. The rooms were dark because the windows were originally small. The kitchen was at the top to allow smoke and smells to exit freely and the … bathroom?
Our guides tell us in the video!

If the Medici family had already ordered to lower all the towers so that they would not be higher than the Bargello and Giotto’s Campanile, in 1550 a further lowering and reinforcement of the towers was ordered: With the introduction of gunpowder, the high towers became an easy target for enemy artillery.

The only tower that today has the original size is Porta San Niccolò – built in 1333 – because it was located just under the hill of San Miniato which offered it a natural protection from enemy fire.

Would you like to try the experience to sleep in a tower house?

Residenza Benizzi has been completely renovated and built in the tower house of the Benizzi family.
Come and discover the wonderful view from up here!