A visit to Palazzo Vecchio during your vacation in Florence 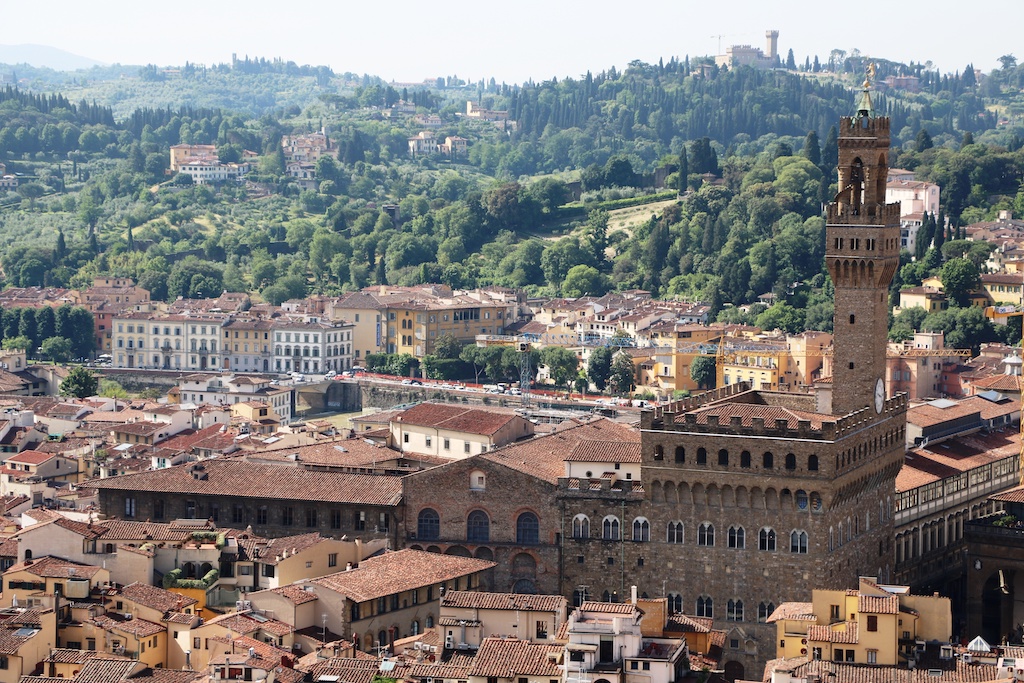 If you are thinking about your vacations in Florence you surely can’t not include in your list of things to see the symbol of the city government of Florence that, with its tower of Arnolfo, overlooks the palaces of Florence.

The Florentines call it “Palazzo Vecchio” and it is the main example of Florentine civil architecture and one of the most significant medieval public buildings in Italy.

The museum route for your vacations in Florence

The first courtyard or courtyard of Michelozzo is the ancient courtyard of the Palazzo dei Priori, it was renovated in 1453 under the direction of Michelozzo and it was decorated in 1565 on the project of Vasari on the occasion of the wedding of Prince Francesco de’Medici (eldest son of Cosimo I) with Giovanna of Austria, here the Putto with dolphin by Andrea del Verrocchio was placed (the original is visible along the museum route in the terrace of Giunone)

Salone dei Cinquecento.From the courtyard a monumental staircase leads to the immense hall of the sixteenth century. Realized in 1494, after the expulsion of the Medici from Florence, when the new republican government considered necessary the establishment of a General Council of the people. It is in the Salone dei Cinquecento that Leonardo da Vinci was asked to represent the famous battle of Anghiari and Michelangelo the battle of Càscina.

Studiolo di Francesco I de’Medici. Prince Francis, attracted since he was very young by natural sciences and arts, wanted the construction of this wonderful space. A small and charming room adorned with paintings, frescoes and bronze statues where the prince collected his private collections. From here, through a small wall door, you can access the Tesoretto: the secret writing desk of Cosimo I.

Quartiere di Leone X . The rooms decorated by Vasari celebrate the great characters of the house of Medici. Each room is entitled to a member of the Medici family, starting with Leone X and Cosimo il Vecchio, passing through Lorenzo il Magnifico and Cosimo I, and ending with Giovanni dalle Bande Nere.

Mezzanino. The Mezzanino is the space that most preserves the appearance of the medieval palace, Michelozzo built it for the Priors lowering the rooms of the second floor.

Second Floor. On the second floor you will find the Elements district where fire, water, earth and air are represented.

Sala di Giove with the Terrazzo di Saturno from where you have a magnificent view of the city, of the hills, of Piazzale Michelangelo and of Forte Belvedere. Here you will find the original Putto with Dolphin by Andrea del Verrocchio.

Quartiere di Eleonora. Eleonora di Toledo wife of Grand Duke Cosimo I, Duchess of Florence and Siena. It was built for her by Vasari and obtained in the ancient rooms inhabited by the Priors. The Chapel of Eleonora was made by Bronzino.

Map Rooms. 33 marvelous geographical maps realized by Frate Ignazio Danti and by don Stafano Buonsignori are painted on the doors of the closets.

Torre di Arnolfo. Passing through the Camminamento di Ronda you reach the small top of the tower from where you can enjoy an unforgettable view of Florence.

How to book the tickets

To book tickets for your visit during your vacation in Florence, we recommend the official website of Palazzo Vecchio where you can check opening dates, hours and how to use the museum.
If you would like to immerse yourself in medieval history and if you will be a guest in one of the Residences during your vacations in Florence, you can book a private tour with the official guide of Florence. She will accompany you and tell you all about the magnificent and intriguing history of Florence.

In addition to the visit to the Palace it is possible to participate in the initiatives realized inside the museum. They are very interesting initiatives, also and especially, for those who want to travel with family, such as the path “life at Court”.

The palace is known in Florence as “Palazzo Vecchio” but its name has changed several times.
In the Middle Ages it was the seat of the main municipal offices and then it was the seat of the Signoria until the middle of the 16th century when Cosimo I moved to Palazzo Pitti.
Between 1865 and 1871 it was the seat of the Chamber of Deputies of the Kingdom of Italy. It stands majestic and severe in its grandeur with the94 meter high tower.
It was built by Arnolfo di Cambio from 1298 to 1314.

The construction began in 1299 and it was designed by Arnolfo di Cambio even if, after his death, many masters followed the project. At the time it was called the “Palagio novo”, it was the new seat of the Priors of the Arts. In the fifteenth century it became the “Palazzo della Signoria” and then from 1540 the ducal residence (“Palazzo Ducale”). It was called “Palazzo Vecchio” when in 1565 Cosimo I elected Palazzo Pitti as his royal palace, considered by the Florentines from that moment the “Palazzo Nuovo”. (the new Palace).

Palazzo Vecchio from 1865 to 1871, during the period in which Florence was the capital, hosted the Italian Parliament which met in the Salone dei Cinquecento.